Shopping For Healthy Food at a Non-Healthfood Store 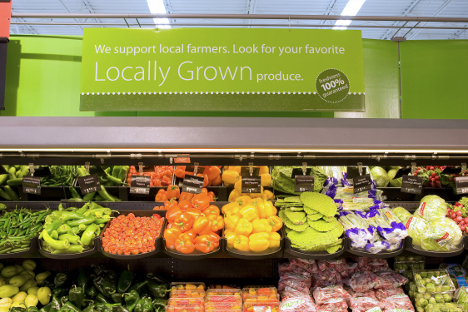 Shopping For Healthy Food at a Non-Healthfood Store

A client recently called me and asked if I would walk through Walmart with her to learn how to shop for food. She said there is no health food store anywhere near to where she lives and all that is available is Walmart. I have never been to Walmart to grocery shop before since I have several health food stores in town so I thought this would certainly be an interesting challenge. How can I tell my clients that I want them to start eating healthier if they do not have any of the foods I would recommend available to them? I was excited to give it a try because I am known for figuring out how to stay healthy in all situations and this was certainly one to challenge my skills.

I arrived at Walmart to meet my client the other evening in a town that I had never been to before. My client waved me down as I entered the store and we got started on our quest. Luckily for me, the beginning of the grocery section is mostly produce! Ok, if people would just learn to eat more fresh fruits and vegetables, half of the battle is won. Also in the middle of the aisle was a display of pistachios. Not bad, pistachios and salt – a relatively healthy snack and one that I could recommend to my client.

Interesting too, as we passed the salad greens, I decided to look over the ingredients in the salad dressings offered. Certainly I would only find dressings loaded with unhealthy fats and sugars. Much to my surprise, the first bottle I picked up had olive oil and healthy ingredients and was sweetened with some pineapple juice instead of sugar!!! I was almost embarrassed since I told her I was certain to only find junk.

The perimeter of the produce aisle was concerning, however, as it was prepared foods in the deli cases that were all loaded with high fat processed meats and macaroni and potato salad loaded with heavy creams and mayonnaise. So, I swiped my hand passed that section and suggested we just skip this area and move on.

We entered into the bread section and were completely unable to find a single loaf of bread without artificial preservatives. Even the ones that looked like wonderful whole grain varieties had ingredients that I personally would not choose to put into my body. So, leaving the bread aisle empty handed was not a good thing. The only bread we found that was edible to my standards was a frozen loaf of gluten free bread in the freezer section further into the store. Luckily for me, my client thought that was acceptable and decided to purchase a loaf.

As we entered each aisle in the middle of the store, it sort of became a scavenger hunt game which actually was quite fun. We had to skip most items in every aisle until we found everything we needed for healthy eating. We found raw nuts and some seeds for healthy fats and protein. After digging through many jars of peanut butter all loaded with hydrogenated fats and sugar, we actually found a brand that was simply roasted peanuts and sea salt. Yeah!!

We found whole grains, such as quinoa and brown rice, and we found bags of dried beans. We found frozen fruits for smoothies, including big bags of wild blueberries, along with many frozen veggies to choose from. For quick prepared foods, we even found some Amy’s Organics burritos and veggie bowls and even veggie burgers and beefless tips for someone who may be trying to transition to more of a plant-based diet. I was overjoyed!!

Those that know me have heard me pontificate about the health benefits of raw unpasteurized apple cider vinegar. I always say that you need to go to a health food store to find the right kind. Low and behold, guess what we found at Walmart? We found Heinz brand raw unpasteurized apple cider vinegar!!! Holy smokes!!! Where I have been? This was amazing.

Then, for some of my healthy desserts, we found pure cocoa powder from Hershey’s (again one ingredient – cocoa!) and even Stevia and Truvia for natural zero calorie sweeteners to make a healthful cup of hot cocoa. We found plenty of options for non-dairy milk including coconut, soy, almond and rice. We also found young coconut water, which is a great healthy alternative to Gatorade as a sports drink ,which is high in electrolytes.

The bottom line for us during this shopping trip was simple. We searched through many boxes and bags of processed foods loaded with chemicals until we discovered the REAL FOODS that had simple ingredient lists consisting of one or two ingredients. Eating REAL FOOD is possible even when you do not have a health food store in town. You can do it too. If you have more difficulty than this, then keep asking the store manager to bring in more and better choices.

For those that are interested, they even had tofu and veggie cheeses. I’m impressed!!