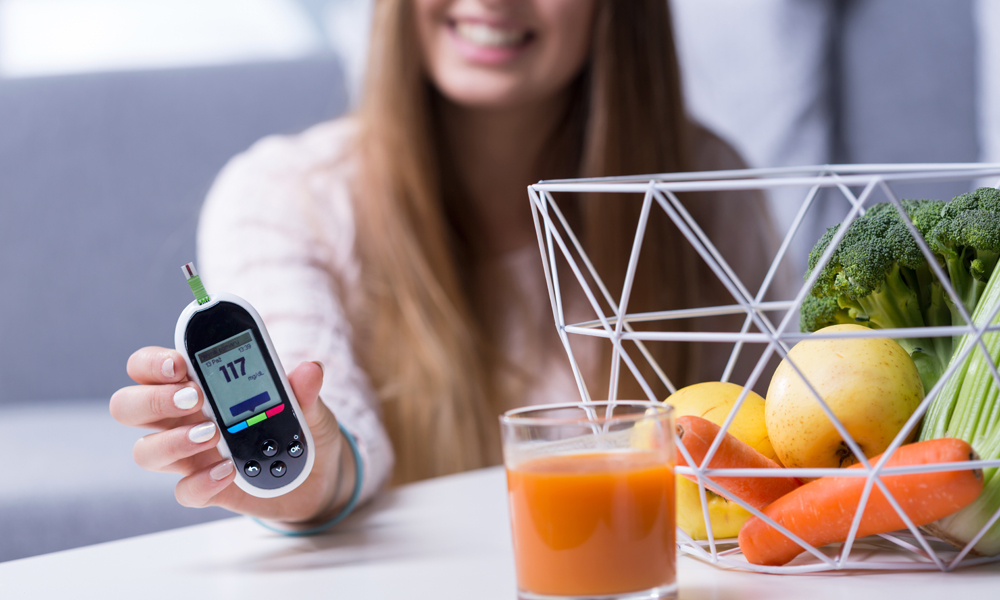 The information in this article is an excerpt from, “Dr. Neal Barnard’s Program for Reversing Diabetes” by Neal D. Barnard, MD and the work of Carolyn Trapp both from the Physician’s Committee for Responsible Medicine.

This groundbreaking work, along with separate work done by Brenda Davis, RD and Gabriel Cousens, MD offers a: New Approach to Nutrition for Diabetes.

You are about to learn a new way of eating that can change your life.

As you embark on these suggested new ways of eating and living, please be sure to work closely with your doctor as diet can change your blood sugar levels and alter your needs for medications. It is also essential to supplement with b12 and vitamin D to maintain good levels to support your health with nutrients that are difficult to get from the diet.

Diabetes is an epidemic that affects tens of millions of people in the US and hundreds of millions worldwide.

Uncontrolled diabetes can lead to complications, including stroke, loss of vision, heart disease, kidney failure and various problems due to nerve damage and circulatory problems. In total, it can take a decade off of your life. Recent research has shown that damage to the body has already begun to occur in people with pre-diabetes.

Luckily, type 2 diabetes is largely a disease of poor nutrition and sedentary lifestyle, so, the disease can be prevented and even reversed, and complications can be avoided with lifestyle improvements.

What is this condition and how can we control this illness?

Diabetes is a condition where your body doesn’t handle sugar very well. Sugar, or glucose, circulates around in your blood instead of going into the cells where it belongs.

Your pancreas makes insulin which is a hormone that goes through the blood and acts like a key to open the door to allow glucose in to the cells of the body. There are several types of diabetes that can occur. Type I diabetes – pancreas is not making insulin anymore – commonly called juvenile diabetes Type II – pancreas is making insulin but it is not working anymore. There is insulin resistance at the cell level. This used to be called adult onset diabetes but has become so prevalent amongst our children that they no longer refer to it with this term.

Gestational diabetes – is very much like type II but occurs during pregnancy and it is a sign that type II may be around the corner.

You may have genes that make you more likely to develop diabetes. Whether you get it or not depends on your weight, diet, and how physically active you are. If you are physically active and eat a healthy diet rich with high fiber plant foods that are naturally low in fat, you are much less likely to get the disease.

Doctor’s typically say that your problem is sugar so don’t eat sugar or other starchy foods that may elevate your blood sugar, like bread or rice or pasta. They may also say, let’s keep fat low as you have a high chance of heart problems. You may be instructed to limit animal fat as this is where you get saturated fat and cholesterol which may affect your heart. You also will want to knock calories off your diet to lose weight. This advice is good but it is missing a large part of what is actually causing the illness and once you understand this missing piece, you will understand how to reverse diabetes.

The issue is, if you look around the world, where do you see diabetes?

In Japan or China, you don’t see the illness and they eat a lot of rice. Rice is a carbohydrate but people are thin and healthy. At least they were thin until fast food restaurants appeared and they began eating less carbs and more high fat foods.

If a high carb diet of lots of rice does not cause diabetes, what is really going on here? Well, let’s look at the fact that vegetarians have very low rates if diabetes. Vegetarians tend to eat more high carbohydrate foods such as whole grains, beans, fruits and vegetables which fill their bellies with foods that are naturally low in fat. This is the key to understand the real issue with diabetes.

To help further understand this, a study of 7th day Adventists was completed which compared those that were vegetarian with those that we not. It is a great group to study because a large percentage of the 7th day Adventists tend to be vegetarian. The remaining life choices of this group are all exactly the same whether they choose to eat meat or not. For example, all avoid alcohol, tobacco and caffeine. The study results showed that within the group that is not vegetarian, the women have 40% more diabetes and men have 80% more than the vegetarians. So, the difference is in the high fat animal foods they eat.

We’ve known for years that a plant based diet is excellent for reversing heart disease. Dr. Dean Ornish is known for his 20-year landmark research study showing that he can reverse heart disease by putting people on a low-fat plant based diet. This information is very important for people with diabetes as they have a high incidence of cardiovascular disease. But what is even more important to realize, is that this same type of diet also helps to prevent and reverse diabetes! Furthermore, this same diet helps to lower blood pressure and to lose weight as well.

To further understand how this new approach to eating for diabetes compares to the American Diabetes Association standard recommendations, Dr. Barnard did a study of women. He did not change their exercise habits at all, he only changed the diet.

The first group stayed on a standard diabetic type diet as recommended by the ADA. The second group (or experiential group) ate a vegan whole food plant based diet with” low oils, no portion control, no exercise no nothing!” After 14 weeks, the first group lost some weight but the vegan group lost more at an average of 1 pound per week (a lot over a year). They also measured how fast glucose was entering their cells and found that insulin sensitivity improved. So, this is not only a good diet for heart health and for trimming your waist line, it is also a diet that improves your ability to manage blood sugar.

So, Dr. Neal Barnard proceeded with a second research study funded by the National Institute of Health. They studied two groups where one group followed the recommendations of ADA, which was the best diet we had up until this point, and the second experimental group ate a vegan diet, which was low in fat. They also considered the glycemic index in choosing foods to keep sugar intake low and they avoided certain foods that turn into sugar rapidly in the blood. They did not look at portions and did not restrict carbohydrates per se. The vegan diet group was eating more carbohydrates (such as beans and rice etc…) but when they measured blood glucose level, it showed it was improving.

A1C is the principal way of tracking diabetes control. It shows the blood glucose average over the last 3 months or so which is a good indicator for how your body is controlling sugar. An A1C reading should be below 7 or as close to 6 as possible. The A1C of most of the group at the beginning of the study was 8.

The first group had a drop in A1C of 0.4-0.6 but the vegan group had a drop of a full 1.0-1.2, which was three times higher than the non-vegan group. The problem was that the diet was so powerful, that they had to reduce or eliminate the medication or else they would become hypoglycemic. Diabetes medications will reduce the A1C between ½ to one point. So, the diet was actually stronger in having a positive affect on the A1C.

What is also interesting is that they were not counting calories or restricting portions and they still lost weight and blood pressure came down. This helps to make this diet much easier to follow and to stick with long-term. You may need to set aside certain things, but you can eat unlimited amounts of the good foods that are satisfying and also support your health.

So how does one get started on a plan to prevent or reverse diabetes?

Well, according to Dr. Neal Barnard, there are three simple steps as follows:

In summary, fill your plate with an abundance of fruit, vegetables, whole grains, beans, peas, nuts and seeds and avoid animal protein. Also, eliminate or try to avoid as much as possible, white or wheat breads, all forms of simple sugar, cold cereals, white potatoes, pineapple and watermelon and be sure to cut back on added oils.

Consider adding cinnamon and other spices to your foods as these have been found to help your body balance blood sugar.

Be sure to design a low fat plant based diet that meets your individual needs and preferences. See our guide to meal choices that is available with this article.

Make sure your doctor knows that you are improving your diet and use your glucose meter. If you feel shaky you want to catch it quickly and have doc lower your medications.